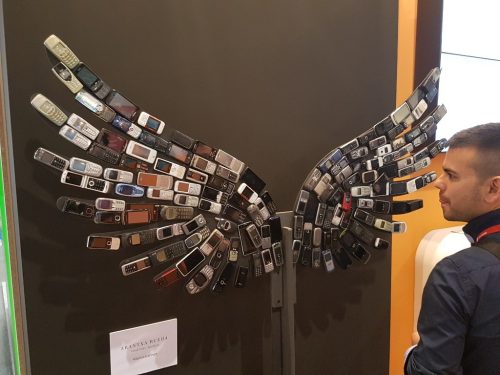 Here we are, back again from another record breaking Mobile World Congress.   The event where the great, the good and anyone with anything to sell in the telco world descends on Barcelona to try and outspend each other’s marketing budgets (Not us of course!).   FirstPartner was at MWC once again, along with our partners The Human Chain.  So, what have we come away with other than a taste of some early spring Barcelona sunshine, sore feet and a bad case of sleep deprivation?

There were the usual round of corporate announcements but these are well covered elsewhere.  So this Mobile World Congress Report is some  personal observations on the things that stood out from the meetings, chats and many kilometres walked between the 9 halls over the course of 4 days.

For me, the show can be summed up as:

The industry is clearly looking forward to the time when everything is seamlessly connected and wonderful – but we aren’t quite there yet.  What we do have  however is Galaxy Gear VR and HTC Vive.  Add to that an endless supply of MWC punters prepared to make themselves look slightly ridiculous as they flail around in simulated worlds reaching for virtual things that no-one else can see.    Exhibitors made full use of this to bring a bit of life to their stands.  Samsung do have an excuse in that they sell the stuff.  Therefore they had a full mini VR theme park installed on one end of their stand.

Ford were at the opposite end of the scale, boasting the show’s biggest booth that had plenty of VR but didn’t feature a single actual product.   There were three VR demos featuring various concepts of transportation of the future and a lot of empty space – oh and a hoverboard type thing in the shape of a spare wheel that would apparently save you the effort of having to walk from your door to your car.

In spite of this, there were a lot of real products on show.

IoT and 5G the Great Hopes for Carriers and Vendors

IoT was vying with 5G to dominate most of the major vendor and MNO stands, notably, those of Nokia, Intel, IBM, Verizon, Vodafone and Orange.  Industrial IoT, connected health, connected home, smart cities, security, drone delivery, and of course connected vehicle use cases and demos featured heavily.  The MNOs were promoting managed services and a mix of LPWA and Cellular IoT deployments and pre 5G hype.

Hidden away on the Vodafone stand was an interesting In-Device CrowdCell demo.  The idea is The idea is to use the computing power and connectivity of everyday devices including white goods to deliver commodity network access points.  The demo featured a drone based aerial access point.

SK Telecom also caught my eye by covering the key bases with some novel twists.   These included an AI driven barista robot  with a slightly weird humanoid on screen face and a strangely rudimentary mag stripe reader and thermal receipt printer payment capability.  Unfortunately, it didn’t understand English so I couldn’t ask why it wasn’t contactless.  SKT were also showing a 5G connected car that will form part of a “dense urban” trial during 2017  and 360 degree live TV broadcast facility transmitting from a glass walled studio on the booth The stand also included an English speaking version of SKT’s IBM Watson powered digital assistant Nugu.

On the software side, Canonical was making a strong play positioning Ubuntu as the OS and orchestration platform of IoT and cloud/edge computing environments.  It was showing-casing Ubuntu powered robots, various industrial and consumer IoT applications and deployments with hardware and carrier partners including Nvidia, Dell and PCCW.

The major identity vendors also had a big focus on IoT.  Giesecke & Devrient used MWC to present its corporate re-branding and a consolidation of its proposition around end to end identity management solutions for connected devices, industrial IoT and financial services.     It’s Convego Hub solution is now integrated with Mastercard’s MDES tokenization service and claims to be the only issuer provisioning solution supporting both major schemes, own branded HCE wallets, ApplePay, Android Pay and Samsung Pay.   .  Oberthur also featured a number of secure IoT solutions.  These included car entry using an encrypted key delivered to a secure element on an NFC mobile phone, secure device provisioning and management, and a partnership with Sierra Wireless to secure LPWA networks.

Handsets – Back to the Past

While Nokia grabbed the headlines and the crowds with its relaunched (but not quite original) 3310 there was real compelling nostalgia on display in Hall 8.1 where a sculpture by local artist Arantxa Rueda had visitors reminiscing over the vintage handsets they had owned in years gone by.

Otherwise no ground breaking smartphone product announcements but I was struck by the sheer number of OEM vendors with names you’ve never heard of selling identikit smartphones primarily into emerging markets under operator brands.

The NEXTech section in hall 8.0 was mainly more of the IoT same but with more drones.  It did however feature a small but interesting exhibition showcasing research work on applications of graphene – including highly flexible conductive inks, displays, and sensors, battery technology, prosthetics and – of course a car.

At the other end of the materials evolution scale, and in defiance of the expensive shining white surfaces, glass and bright lights dominating the big vendor booths in the main halls, LPWAN vendor SigFOX featured a stand constructed of brown corrugated cardboard.   This was of course a marketing statement, but quite a clever one, choosing a low impact, recyclable material to emphasise the low power consumption of the technology.  The construction of the arched centre piece was also intriguing and a refreshing antidote to the ostentatious architectural posing of the likes of Huawei and Ericsson.

The Nextech Section also featured my favourate device of the show.  The world’s first AI toothbrush.  Machine learning in a toothbrush?  yes apparently.

Actually when it was explained, it did make some sense. Paired with a smartphone app, it learns and “maps” the layout of your teeth and tracks where you are, and aren’t brushing effectively.  Not sure I really believe this requires deep learning algorithms, but it seemed to work for the Thunderbirds puppet-alike model being used to promote it (one for those Brits old enough to remember).

Of course, it wasn’t just swanning around looking at interesting stuff.  We used the opportunity to get feedback from preview versions of our upcoming IoT and Distributed Ledger Market Maps.  We will be publishing these Maps in the near future – let us know if you would like to know more.   We and our partner company, The Human Chain, also had a number of discussions on areas we have been recently working on, including PSD2, Open Banking and IoT payments, just some of the things that will be keeping us busy until its time for Mobile World Congress 2018!