How Apple Pay Works and Why it Matters 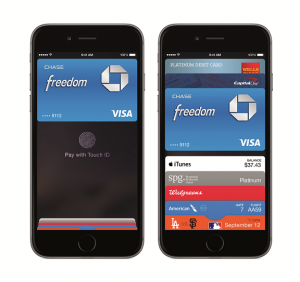 This week’s Apple launch, which introduced the world to iPhone 6, Apple Watch and Apple Pay, was a masterclass in the slick presentation of a complex payment concept. Although you might not have noticed it, it was also the start of subtle co-marketing campaign with the big guns of the card payments industry. We believe it indicates a mutually-beneficial and potentially highly-effective co-operative strategy between Apple and its card scheme and banking partners that will set the agenda for the development and delivery of mobile payment services.

In last week’s post we posed 6 questions which would need to be addressed in light of Apple’s announcement, which will define how Apple and iPhone payments shape the development of the mobile payments sector. We can now answer those questions with a much greater degree of certainty so let’s look at them again based on what we now know.

1. Will Apple take control of the mobile wallet?

Yes. Passbook is extended to “store” credit and debit cards and is the gateway to the user experience. But what is more important is that the whole user journey looks slick and frictionless – from adding payment cards to the wallet, to authenticating, paying and dealing with lost or stolen phones. It appears clear and simple to understand and the messaging emphasises ease and convenience, whilst acknowledging and addressing security concerns (a heightened issue at the moment, especially for Apple in the light of the i-Cloud celebrity photos storm).

I’m not a great Apple fan but acknowledge that when it comes to a simple, painless and complete experience they are about the best there is – and it looks like they have probably applied that to Apple Pay.

As we pointed out, a potential downside of an Apple-branded and led service is a reduction in brand presence for the partner banks. In this case, the banks and card companies appear to have handed top billing to Apple. This may not be as daft as it seems.

The wallet experience is probably as good as the banks could hope for from a third party branded App, which makes the card brands clearly visible and well presented when the wallet is opened.

Of course the subliminal brand exposure will be less than with a physical card as there is no need to open the app or even wake the phone to make a physical payment. But compared to the benefits around ease of use this is minor.

Banks will retain their own presence on the phone through their mobile banking apps.It is much more likely that Apple will be able to convince its customers to adopt Apple Pay (and generate transactions and revenue for the bank and card company) than a bank would be in getting its customers to download and use its own payment app.

There are a couple of concerns however.

Firstly, iPhone users have to take to using Passbook. To date it has not been the most successful of Apple’s branded apps.

Secondly, we expect there will be restrictions on how third parties can develop and deliver services. Banks will probably not be able to wrap their mobile banking, money transfer and person to person services into a single app or wallet alongside card payments on the iPhone. This may not be too much of an issue for the customer, but it raises questions around service design and customer communications. Furthermore, although it is not yet clear, we expect that Apple will retain control over NFC-based payment apps on iOS. While there is an API to build Apple Pay into apps, Apple is unlikely to give developers full access to the NFC functionality. This would prevent retailers, banks and others from developing their own NFC-based payments apps and services and would control who can and can’t be on the iPhone/Apple Watch payment roster.
The other implication is that it excludes the Mobile Network Operators from having a branded NFC wallet experience on the iPhone.

2. Will there be a partnership with the major card schemes?

Yes – And this is perhaps the most interesting part as it is at the heart of how Apple Pay works. Listening to Apple’s presentation you would think that Apple have designed, built and delivered a payment revolution in Apple Pay. They haven’t.
Apple Pay is the first full deployment of the tokenization payment schemes provided by the card companies. Behind the Apple Pay brand is the Mastercard Digital Enablement System and Visa Token Service as well as the associated payment card issuing and acceptance infrastructure.

What tokenization does is make card payments more secure by creating a number or token that replaces the payment card details. This token can be stored on a mobile phone and when a payment is made it is the token that is passed to the retailer or merchant, not the card details. The token is matched to the card details by a secure Token Issuer service deep within the back-end card processing infrastructure. Tokenization can be used for NFC, e-commerce, cloud based and so-called Card on File Services such as iTunes.

Although it hasn’t been explicitly stated, we believe the card schemes will act as “Token Issuers” and will store card details and issue the Token that resides on the secure element in the iPhone. Payments will be processed through merchant acquirers and issuers according to the Tokenization framework specified by EMVCo. What Apple adds is the additional biometric security that comes from using Touch ID and biometric sensors in Apple Watch.

Again this is a mutually beneficial arrangement for both parties. Apple takes advantage of a universal issuing and acceptance infrastructure and are relieved of handling security and risk. In return, the card schemes have a well-executed, well branded kick-start for tokenization.

3. Where will account details be stored and who will control them?

The token will be stored within a secure element chip in the iPhone. It appears that Apple will retain control over this but will not have access to the token or card details.

Again the PR spin is interesting here. On Tuesday, Apple were able to turn the functions and limitations of Tokenization into a positive security story. Most notably, Apple made a virtue of stating that it is not collecting transaction data, implying it has the best interests of consumer privacy at heart and probably taking a side swipe at Amazon and Google in the process. In fact it can’t collect this data as under tokenization it has no access to it.

The real implication of an Apple secure element coupled with a card industry delivered payment process is the exclusion of the Mobile Network Operators from NFC payments on iPhone.

4. Will Apple Pay be NFC dependent?

Yes (for physical payments) but e-commerce and in-app payments are also supported. So it helps to resuscitate NFC, but not in the way its biggest proponents in the carrier word had hoped. It also recognises that a large and increasing volume of payments will be e-commerce and that the tokenisation standard used prepares the way for hybrid e-commerce/bricks and mortar transactions.
Dependence on NFC makes adoption dependent on the deployment of contactless acceptance terminals. This will throttle uptake but means that merchants will not need to install new or proprietary terminals.
There was no mention of iBeacons or links to promotions in the presentation which is somewhat going against the tide of hype around these value-added services.

5. Will Apple be looking to make money from payments?

This is not definitively answered but it has been reported that Apple will earn a small transaction fee in return for providing the biometric authentication. This will be a very small fraction of the transaction value and payment volumes will need to be significant for it to make a material difference for Apple. More importantly, it is unlikely to be big enough to adversely impact retailers and so will keep them on side. There may be some other reciprocal marketing or incentive deal involved but we are unlikely to find out about that.

The main benefit for Apple may however be customer lock-in. Having your payments and cards stored in a service that you are comfortable with is another disincentive to switch brand when you come to upgrade your phone. There may also be an up-kick in iTunes and App Store revenues coming to Apple if consumers get Apple Pay transaction happy.

6. Will iPhone actually make a difference?

Yes. It provides the clearest statement to date of the potential of a mobile payment service that utilises the best aspects of existing payments infrastructure and positions card-based processing at the centre of mobile payments.

It gives a strong boost to tokenization and is likely to be the reference model for card based payments on other mobile platforms. Apple is unique in its ability to own the complete experience across its platforms, so implementation across Android is likely to be much more fragmented with a mix of vendor, Issuing Bank, MNO and retailer-led schemes.

So the banks and the card networks are happy and Apple is happy. Apple has pulled off a slick PR coup through a presentation that makes it look innovative and a champion of the consumer when in fact it is actually just branding a service developed and delivered by the card industry. But hey, it looks a lot better coming from Apple than from a bank.

It gives a strong mobile payments proposition positioned against alternative players, notably PayPal, but it marginalises the Mobile Network Operators. What should they do?

There is nothing to stop MNOs adopting a similar model and there are other processing and settlement options than using cards. The majority of smart phones in the market place will not support Apple Pay and MNOs still have the strength of very large customer bases as well as the ability to offer a handset independent proposition. It just needs some careful proposition design and execution that takes full account of the needs of consumers and merchants and effectively balances consumer experience, processing cost and security.